Say whaaaaat? I'm back and I'm here to share with you one of sweet P's favorite dishes. The original recipe calls for a couple extra ingredients (and they definitely do add a little something special) but this slightly adjusted version is still delicious. It's quite mac n cheese-esque with a bit more substance. If you've ever brought home the pre-cut organic butternut squash and/or the goat cheese logs from Costco with the best intentions but realized you had no idea what to do with it/them, this is for you. You can substitute a 2 lb whole butternut squash for the pre-cut package but you won't get any extra credit for peeling and cutting it yourself. 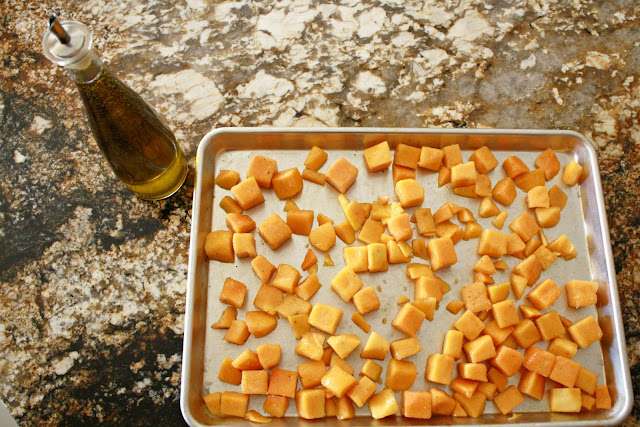 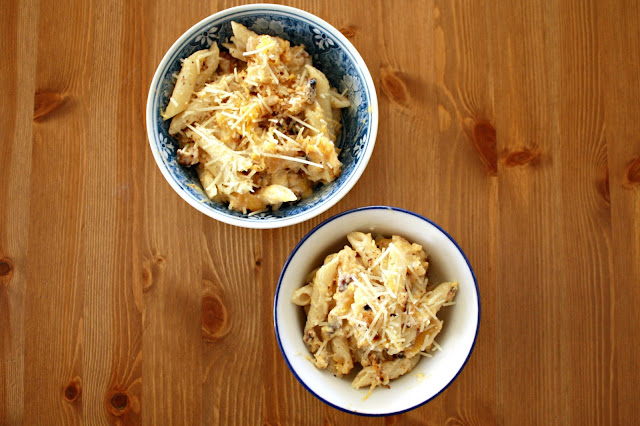 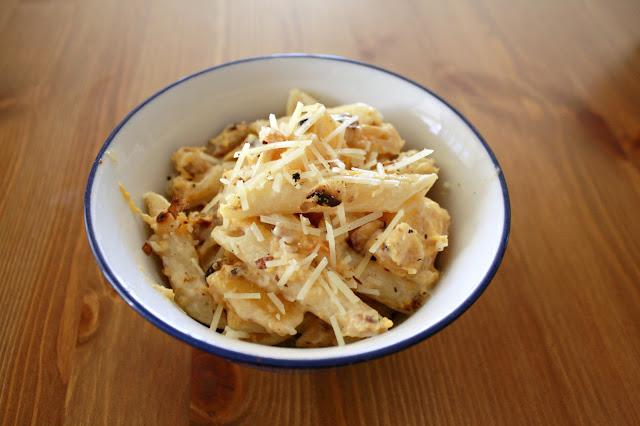 
* If you want to keep the squash pieces in tact, be more conservative with the roasting time. If you want the squash to break up and kind of melt into the sauce, let them roast a bit longer but be careful not to burn them. If you do, just add "charred" to the dish name and pretend it was intentional.

** Cook your pasta in salted water according to preference. If you're like me, you'll want it al dente. If you're like my mom, you'll want to cook your noodles until they're a mushy mess. To each her own.
***You can toast the walnuts in the oven at 350 degrees F for ~5 mins or you can also toast them in a dry saute pan over medium heat. Option C is to not toast them at all but toasted nuts are definitely tastier.
1 comment:
Email ThisBlogThis!Share to TwitterShare to FacebookShare to Pinterest
Labels: food 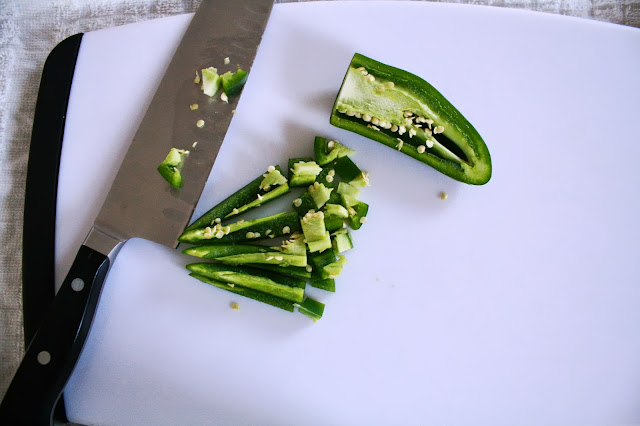 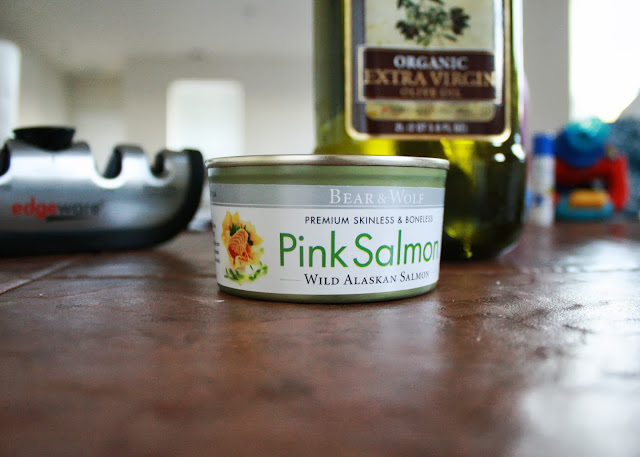 Although my return to blogging didn't start off on the cheeriest of notes, let's see how long this revival lasts. Don't call it a comeback.

When I first started on my domestic journey, I was so scared to stray off the recipe path. I haven't graduated to wing-it-cum-laude yet but I'm getting better at replacing ingredients with what I have on hand. Below is a really versatile dish that was adapted from this one and it hasn't failed me yet. Here's what I used tonight but feel free to mix and match with what tickles your pickle palet. 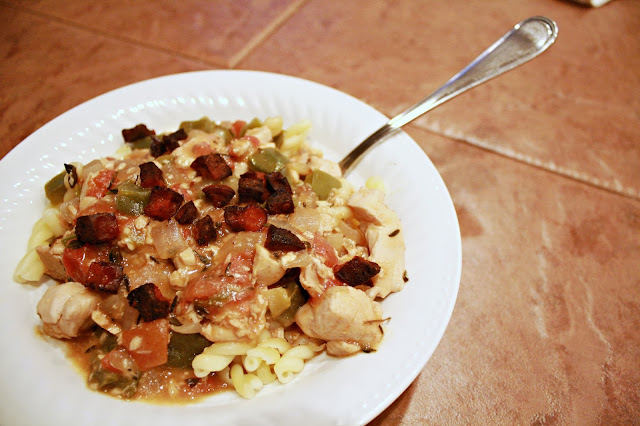 No comments:
Email ThisBlogThis!Share to TwitterShare to FacebookShare to Pinterest
Labels: food

It's been so long since I've posted. I wouldn't be surprised if this little blog didn't make the end-of-Google-Reader-cut for most folks. S'okay. I really just wanted to write this while the details were still fresh in my mind. In the future, I may not want to remember the details but that's when the delete post option comes in handy.

This past Wednesday wound down like any other day. We fed the kids, bathed them, tucked them in after reading way more books than what was originally agreed upon. Matt and I ate dinner and talked about our day. Around 8 pm, Hew came downstairs, half asleep, complaining he was cold. Matt took him back up to his room and tucked him in extra tight as he inherited my tendencies to kick off all the covers in his sleep. Then around 10 pm, Hew got up again and came into our room while I was getting ready for bed. As I carried him back to his room, I  noticed he felt a little warm but he had complained about a stuffy nose that day so I dismissed it as the onset of a cold. "Probably from his kissing spree of random poles at the park," I said to Matt. He's a smoocher, that kid. About an hour later, Matt was on his way upstairs when he found Hew sitting on the steps. Matt scooped him up and was just about to scold him for getting up when he started shaking.

I was woken up by a hysterical husband who came charging into our room with our son in his arms. I watched in denial as the tiny body of my 3 year old convulsed and twitched. His mouth started to foam and his lips turned blue. I looked into his eyes searching for my sweet baby boy only to find a lifeless stare. While Matt frantically screamed, "WHAT'S WRONG WITH HIM?! WHAT DO I DO?!" I reached for my cell and dialed 911. When the dispatcher asked, "What's your emergency?" my response was almost involuntary. "I think my son is having a seizure." When the paramedics came, they were a vision to me. I don't mean to be cheesy or cliche but those men in uniform were like knights in shining armor riding in on a white horse with flashing lights. It was then that the reality of it all finally sank in and I became the hysterical mother you see in movies.

Hew suffered a febrile seizure. It only lasted a couple minutes but it truly felt like an eternity. We stayed at the hospital overnight where they monitored his temperature to make sure it didn't creep back up. His strep test came back negative and chest x-rays looked great. The saint of an ER doc (he answered alllllll my type-A questions with nothing but kindness) thought that Hew developed an upper respiratory infection (hence the stuffy nose and red throat) which led to his fever. Even though it was low grade and Hew has had higher fevers before, it was the quick spike that led to the febrile seizure (a learning from one of my annoying questions). Hew was back to his usual happy, chatty self before we even left the hospital. Despite a warning that he wouldn't have much of an appetite in the coming days, my son asked for pancakes and bacon as soon as we got home and polished his plate. He doesn't even remember the ambulance ride.

I had read that seizures are not uncommon among young children when they develop a fever and that it's partly because their brains are growing and developing at such a rapid rate, but all logic and reason vanished when I witnessed it happening to my baby. That sight is branded into my brain and I see a vivid replay of it every time I close my eyes. I can only hope the image will fade away with time. I look forward to the day that I won't be scared to open my son's door in fear of the worst, that my heart won't stop every time my child gets a fever. 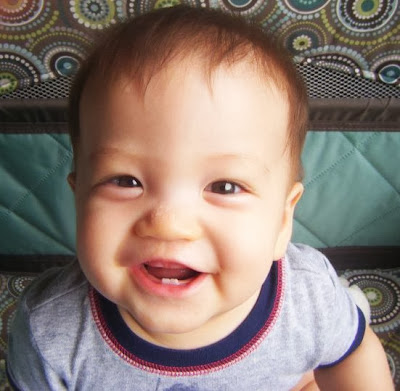 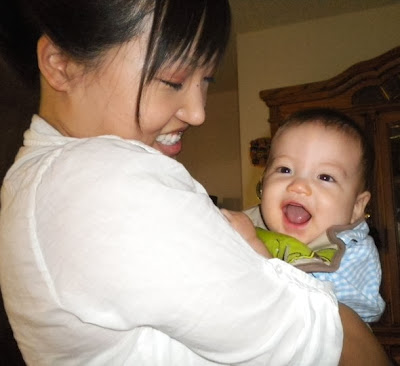 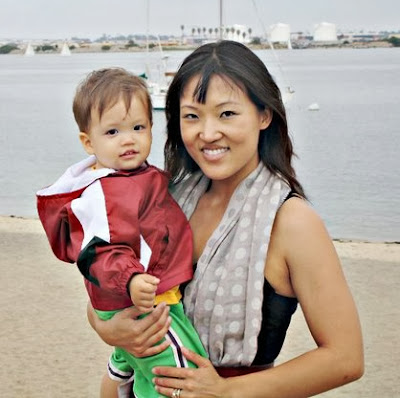 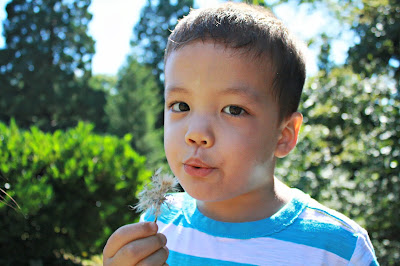 This recipe caught my attention because it's the lazy man's chicken pot pie. Then I made it even lazier. Because when there are more Goldfish on the kitchen floor than in the box and the dirty dishes are starting to resemble a Jenga tower in the kitchen sink, corner-cutting is in order. Next time I think I'm going to cut the number of biscuits to 5 in order to achieve the optimal biscuit to chicken ratio.

Ingredients:
Butter or spray a large casserole dish and preheat oven to 375 degrees. In a large skillet, warm up a little extra virgin olive oil over med-hi heat.

Season the chicken with salt & pepper then brown in the pan for ~5 mins, stirring occasionally. Transfer the chicken and its juices to a bowl & set aside.

Add a little more EVOO to the same pan and heat it over med-hi heat. Add the onions and carrots, season lightly with salt & pepper, and cook for a few minutes until they soften. Add the green beans, garlic, season lightly again, and cook for a couple more minutes. Add the milk. In a separate bowl, whisk the flour into the broth until its completely dissolved then add to the pan. Stir everything together and bring to a boil. Reduce heat to med-low and cook for a couple more minutes until everything starts to thicken. Add the chicken and its juices back to the pan along with the thyme. Stir to combine. At this point you can season with salt, pepper to taste if you need but I found that the previous layers of seasoning was enough. Spoon the mixture into the casserole dish and top with the biscuits.

Bake for ~15 minutes or until the top of the biscuits are golden brown and scream to be eaten.

...but posting about it on a Wednesday. Tacos are one of my fav go-to meals at times when I'm feeling hyper-lazy. You like that oxymoron? Thought so. My only complaint used to be the heinous levels of sodium in pre-packaged taco seasoning (unless you happen to like water retention and cankles) until I came across this gem. The recipe below is scaled up to make a bigger batch because "sensible portions" are profane words in my household. Mix up all the ingredients in a bowl, store in an air tight container, and a Mexican fiesta will be no further than a pantry away.
Brown up your ground meat o' choice in a skillet, toss a few palmfuls of taco seasoning in, cut up some 'maters and 'ocados for topping, and you have dinner before Chopped gets to its dessert round.
1 comment:
Email ThisBlogThis!Share to TwitterShare to FacebookShare to Pinterest
Labels: food
Older Posts Home
Subscribe to: Posts (Atom)

Other Places You Can Find Me